Rebecca Newman gets cosy at a stylish retreat in Cumbria

We arrived in true wintry Lake District weather: rain sheeting across the platform at Oxenholme village station. But waiting by the station’s red-painted columns stood a chauffeur in suit and peaked cap, holding an umbrella. Thus the tone of the weekend was set: stunning, if soaked, English countryside and flawless old-school service.

Initially I’d hesitated over the Lake District for a short break: surely it was better to pick somewhere closer to London if our essential aim was rest. In fact, the Gilpin Hotel & Lake House, with its wood fires and snug drawing rooms, is an ideal place to step out of the world and pause for a timeless timeout.

A family-owned operation, the Gilpin has been with the Cunliffes on and off since 1919 and lives up to its claim of feeling like home. As well as the original hotel, there is a second property on the edge of a lake called Knipe Tarn. The Lake House has six bedrooms, and considerably more spa areas. We checked into Gertie (each of the rooms is named after a past Cunliffe sister) and spent a moment drinking in the peace and quiet. 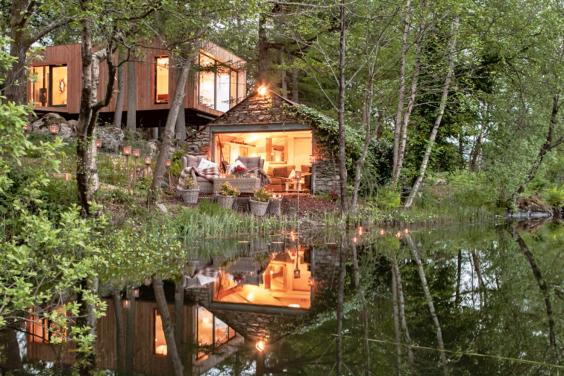 Warm and snug: the Boat House

It isn’t high glamour. There’s no cantilevered furniture or electric call buttons, and you don’t get the feeling that Kate Moss might have once done something mischievous in the bathtub. In Gertie, there was a stuffed cat on the bed (which doubled as the Do Not Disturb sign), a huge bed with a buttoned headboard, and a Roberts radio. The room was vast. As was the bath. And the rainwater shower. There was tea and shortbread and views far across the valley to Morecambe Bay.

Evenings at the Gilpin begin with cocktails. A silver Land Rover appeared at seven to take us up to the restaurant in the main hotel. Our driver Andy told us that a camera crew was in residence, as the BBC is following the Gilpin’s hunt for a new chef for Service, a programme due to air in February. ‘I was told to scrub up, so I had my hair cut and polished my shoes,’ he said. ‘Then I’m told to herd the llamas into a different field, so I’m out there in the mud with a stick and some carrots...’ Why are there llamas? Serendipity. Like many of the hotel’s guests, they came to the Gilpin and didn’t want to leave. 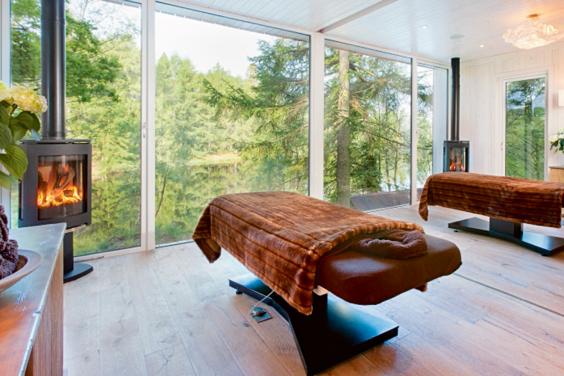 Before dinner we hoovered up handmade pastry twists dipped in truffled crème fraîche and drank dry martinis. The fires crackled. The other diners ranged from a party of well-built retirees from Manchester, whose banter with the staff suggested they enjoy frequent visits, to a couple in their thirties, he with a medallion and she in a tight white cutaway dress. All appeared to be having a jolly time. As were we. The menu was thoughtful, and the scallops wonderfully fresh. The halibut, too, flown in from the Scandinavian fjords, was marvellously soft and sweet.

There is a range of excitements for guests who want to do more than ricochet between the hearth and various local pubs. You can stroll up Cat Crag, to admire the views across to the Isle of Man, or take out a boat on Lake Windermere and recite Coleridge to your beloved. There’s also golf, mountain biking, fly-fishing and walking in the National Park. More cerebral types can head to the homes of local heroes William Wordsworth and John Ruskin, while The World of Beatrix Potter is the perfect family day out.

But it would be a shame to miss the Gilpin’s Jetty Spa Trail, a bespoke couples package in a new treatment suite overlooking the lake. A deep tissue massage, made from oils of your choice, is followed by a wander through the wood to the Boat House where you sit under fur blankets and enjoy afternoon tea. The session is rounded off with a glass of champagne in the hot tub. Indolent? Sure. Restorative? Closer to sublime.