Home > Adventure & Travel > Skiing in Antarctica: 'A wilderness experience seared into your soul'

Skiing in Antarctica: 'A wilderness experience seared into your soul'

Rebecca Newman skis one of the most remote places in the world...

Just walk normally,” called our guide, as I tramped in ski boots down a steep snow hill, towards the icy water and the waiting boat. It wasn’t easy. I was lit with adrenaline after skiing a wide, wild descent, the mountain around us glowing gold in the sunset. Our descent fell sharply to a bay noted for humpback whales. While we were roped together I was keenly aware of the drop, how remote we were - and how singular the experience. But then nothing is ‘normal’ in Antarctica.

I’d long dreamt of the frozen south. I grew up with stories of Scott's and Shackleton's heroic endeavour, of polar landscapes populated with wandering albatrosses, killer whales and friendly penguins. But I had no interest in watching it through the porthole of a ship. Happily, I found Aurora Expeditions. Founded by Australian explorer Greg Mortimer, Aurora is all about adventure, about getting ashore to experience Antarctica first hand. Head ski tour guide Tarn Pilkington, 53, has been coming to Antarctica for 25 years, and otherwise heli-ski guides in New Zealand and the Himalayas. After a phone conversation that soon convinced me I’d be in safe hands, I signed up.

After a good deal of squats and rather more planning and testing of kit, I flew to the Argentinian ‘end of the world’ port, Ushuaia, where I met Pilkington as we boarded our boat. Named after Greg Mortimer, it is a new vessel which proved extremely comfortable, carrying 120 passengers over eight floors with numerous observation decks, a sauna with floor to ceiling windows and a lecture lounge. As we set off on the 1000km journey south, Pilkington called a briefing in the library for the five passengers who’d signed up to ski.

“We’re going to have a fantastic time,” he beamed. “But prepare yourself for challenge. You’ll challenge yourselves, and you’ll be challenged.” He drew a picture of a crevasse. I took eager notes, listing the essentials for each outing which include life jacket, elaborate layers, avalanche equipment and a harness for when we rope ourselves together - or fall into a glacier. “All that said,” Tarn continued in his wide Kiwi burr, “most injuries occur on the shup”.

The others echoed my excitement and trepidation. Mengzi, a 32 year old New Yorker financier had taken a two year sabbatical to ski. “I had to ski all the continents, that’s why I’m here,” she told me. The other three, a group of Brazilians Joao, 26, Julia, 28, and her father Sergio, 52, looked ready for anything. “We were drawn to do something different,” Sergio said. After two days of briefings and lectures at sea, we reached Trinity Island, a series of rocky points and headlands half-covered in snow. We assembled on a lower deck holding our ski boots in silver waterproof dry-bags. The crew stacked our rucksacks on top of our skis in the zodiac (an inflatable boat), then we slithered in around them. The sky and sea melted together in a leaden grey. As we sped to shore a dusting of snowflakes caught our goggles, and a white snow petrel skimmed overhead.

At our landing point, a lump of ice jutted from the rocks. A female fur seal lay on it, watching us with limpid brown eyes. There are firm rules about staying five metres from wildlife, so we paused, but as we watched the shelf broke under her. With a grunt she slid into the sea, leaving us free to disembark. Our second guide Mike, 58, stamped a path in the snow and we clambered up after him, and prepared our skis with skins and ski crampons (metal forks that stick out downwards on either side of the ski to add purchase when touring up ice).

The snow was, Tarn told me later, typically Antarctic; that is to say variable. We skinned up through patches of sastrugi (where the wind has blown the snow into small ridges), pockets of powder and areas of ice. The weather was equally changeable, with the wind fast whipping up against us. Somehow battling onward behind several layers of buffs felt an appropriate welcome to this coldest and windiest continent. It was marvellous to be moving, to be propelling ourselves upward into the white. Time was short after our deferred landing and safety drills, so after a couple of hours we skied down. It was brief, but still... “We did it,” yelled Mengzi. It was thrilling simply to have skied in this pristine place. 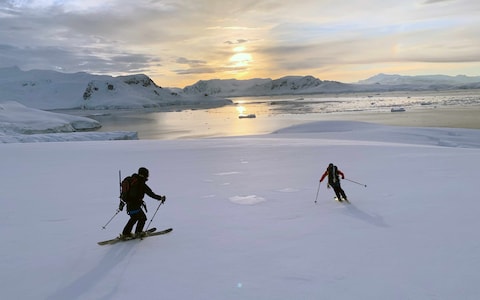 'It was thrilling simply to have skied in this pristine place' CREDIT: AURORA EXPEDITIONS

Here amidst the ice, thoughts of climate change were never far away. “Is it right to come here as tourists?," I asked Mortimer, as we sat down to lunch on the boat. “We are not yet at a point where Antarctic travel is having an impact, but we need to be vigilant, and deliberate in our education to passengers of the value of these places,” he said.

For me, long of a green persuasion, being shown how fast some glaciers had receded (research has found the rate of ice loss has doubled in six years) and hearing from the onboard naturalists about the decline of species around us (some Gentoo colonies numbers of penguin chicks are down 60 per cent) was a robust reminder of how precarious the Antarctic is, and how precious.

The good news is that Aurora’s new ship is designed to have one of the lightest possible ecological footprints. With an upturned ‘X-bow’ it cuts more efficiently through the waves, and was estimated to have used half the fuel an older vessel would have, while carrying twice the number of people. She has the option to ‘virtual anchor’ where appropriate, using GPS to maintain position rather than dropping a metal anchor to the sea floor. Waste is kept on board, plastics are almost entirely phased out and Aurora is working its way towards a goal of being carbon neutral.

On leaving Trinity Island, we navigated through the Gerlache Strait. I was settling down to a chocolate eclair when the tannoy announced that seven killer whales were breaching alongside us.

It was soon time to ski again. This time at Portal Point, an area used by British dog teams in the Fifties because of the snow slope that leads from the sea up toward the Peninsula Plateau. “This is crevasse territory,” Tarn announced. “We don’t need ropes, but leave at least five metres between you, as you don’t want to have two people on the snow bridge [over a crevasse] at the same time.” The soft snow made touring hard work. “It’s a pleasure to be here,” said Julia, with bruises coming out on her shins, “but also very painful.”

“Snow quality: two out of ten,” Tarn radioed to the captain on the ship’s bridge. “You won’t be seeing any pretty skiing.” In fact we barely skied at all. We traversed cautious across the slope, kick turning at either edge. Joao had a go at some turns. “I must have fallen eight times,” he panted. 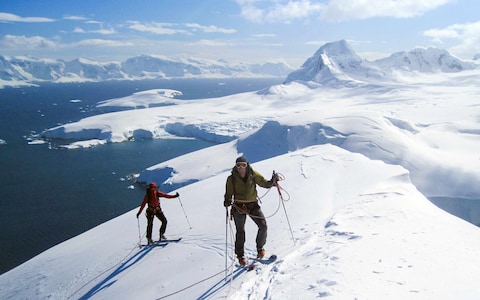 Passengers skin up before making their descent CREDIT: AURORA EXPEDITIONS

I paused half way down, my angles tangled in a rusty kick turn. Out in the bay a cormorant soared high, and as if on cue a minke whale curved out of the water, and spouted.

The next few days were blue and brilliant. We didn’t go particularly high - generally between 300 and 500m - but each place had its own sensibility: on Doumer Island we skinned up a broad field of glinting white rising to a ridge, our crampons crunching at each step. As we toured up the sunlight softened the surface, gifting us a joyous race down. The tour up Deception Island to the rim of a live volcanic caldera brought views across to the surrounding islands, and even some desirably chalky snow, duly toasted back aboard with several rounds of whisky.

Neko Harbour was a lesson in perseverance. The bay was full of icebergs; in the zodiac we dodged our way for some 10km to a point Tarn was excited to investigate. “Each time we come I scan with a map and binoculars to find fresh places to explore,” he beamed. He keeps a list of potential spots, including more challenging (steeper, or full day touring) options for highly experienced guests. However, when we arrived Tarn frowned. The wind was blowing brash ice onto the rocks, and could potentially block the passage for a zodiac coming back to collect us. Time for Plan B.

As we scudded back across the harbour the winds stirred up the waves, heaving wet across our waterproof shells. Our new destination was the beach at Neko, among a Gentoo penguin rookery. As we approached three penguins porpoised out of the water alongside us, then popped out onto the rocks. They had scant regard for the five metre rule, craning close and quizzical as we made a pile of our equipment. “Don’t ski through any penguin poo,” warned Tarn. “It stinks.”

Around us the ice rose into an amphitheatre of glaciers ending in great blue bluffs and seracs (ice columns). One fell off into the sea, a boom echoed around us, and a cloud of spray hung over the water. We gleefully chased down, threading round the pink spatters of guano.

Our sunset ski at Wilhelmina Bay was one of those perfect moments in life. A sundog hung a rainbow over the sun. In every direction, the water was studded with icebergs turned pink in the light. The mountain, the world felt ours alone. 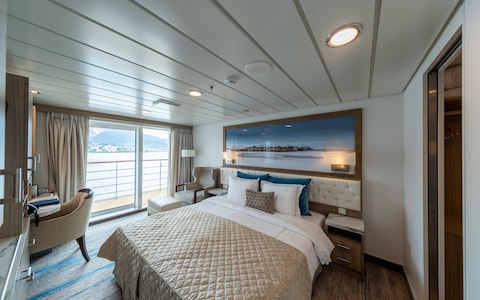 “This was my favourite ever ski touring,” said Mengzi. “To be the only person skiing for thousands of miles, the only sound that of your skis, it is the most incredible thing.” Antarctic skiing will not give you thigh deep powder, and the apres is limited. It will give you some serious bragging rights - but forget that: it’s a wilderness experience seared to your soul.

How to do it

Polar Routes (0203 196 1000; polarroutes.co.uk) offer a 12-day itinerary to Antarctica on board the ship Greg Mortimer with Aurora Expeditions from £12,399 per person, based on two people sharing a stateroom cabin on Spirit of Antarctica Voyage in 2020/21. The price is inclusive of international flights with Norwegian, domestic flights and transfers.

Ability to ski off-piste in a variety of snow conditions is required. Touring experience an advantage but not essential.

At a glance | Is tourism good for Antarctica?

Dr Heather Lynch says visits to Antarctica can raise awareness about the impact of travel on the world. Dr Lynch is Professor of Ecology and Evolution at Stony Brook University, New York, and her research focuses on surveying Antarctic wildlife with a view to its conservation.

“I would be the first to jump in and say if I thought tourism was having a negative impact on the ground. Everything suggests that the rules put in place by IAATO (International Association of Antarctic Tour Operators) are doing a good job.

“There is a bigger question, which is about the carbon footprint – but this goes for all travel everywhere. I hope that visiting Antarctica crystallizes concerns about climate change in people’s minds, and leaves them with a heightened sense of responsibility to our planet.”