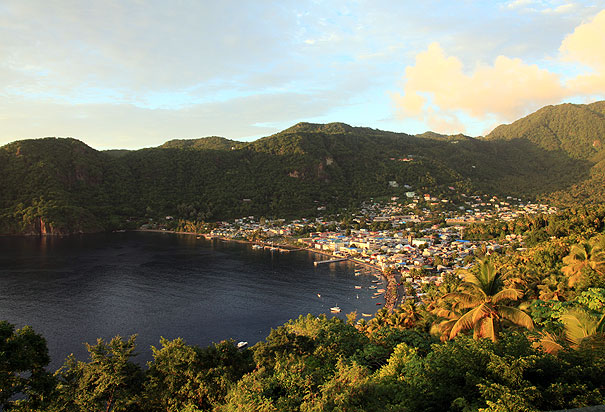 First we hear the screams. Guttural shrieks that echo through the whirr and drip of the rainforest. The sound is half fear, half exaltation, and it's coming from a series of zip wires strung through the top of the trees. The last time I went zip lining, I was seven and we called it a 'death slide'. Today our guide, MacGuiver, straps us carefully into the safety harnesses.

There are 12 high-tensile steel cables spread through the trees of Errand Estate, a former spice plantation, inland from the fishing village of Dennery. The early wires are low, but they become progressively faster and higher, with the highest at 150ft. Looking down is vertiginous, but summon up your courage and jump and the feeling is close to flying. At 800ft, the longest wire bursts through the sun-dappled canopy and into open sky above a river, affording stunning views over the top of the forest. St Lucia is fringed with bright, powder beaches and crystal-clear water, but the interior is a tangle of primeval rainforest, wet, shady, crawling with life. Above rise crumbling volcanoes, whose fumaroles puff sulphur, and famously the twin Pitons, the two jagged peaks that are emblems of the island.

As MacGuiver catches me onto the platform at the other end, I ask him why the tree holding it is padded. 'Sometimes we get huge people, and they go very fast,' he says. 'And it's for the guys who finish up wrapping their legs round either side of the tree.'

If you prefer to be self-propelled, on the southwest of the island, Anse Chastanet, a former sugar plantation, is now home to a jungle bike circuit. The bikes, an impressive array of Cannondale 500s, are stabled in the buildings where the cane was squeezed, and the juice boiled into molasses.
Tyson, nicknamed 'Bike' Tyson, leads us onto the main two-mile circuit, off which the expert routes loop. It is a stunning place to cycle: orange birds of paradise and red ginger lilies break up the green of the elephant ferns. As the track twists through thickets of bamboo, my tyres shudder over roots, skidding when I corner in the dirt. The air is rich with the smell of breadfruit and heavy with humidity. I'm grateful for the cold spray from drenched banana leaves I crash through, as I shoot down decaying sugar irrigation systems to the old reservoir.

Exhausted, elated and coated in mud, I hand the bike back and walk down to Anse Chastanet's private beach. The scuba diving here is some of the best in the Caribbean. The area is a marine reserve, containing the dramatic Superman's Flight – a hard and soft coral reef, where you see turtles, seahorses and frogfish.

After the biking, I'm happy to relax with a sundowner. The sugar cane in my rum punch is still grown at Anse Chastanet, now a relaxed resort, but it is a throwback from another era. In the 17th century, the island became an export centre for sugar, triggering British and French interest in the lucrative harvest, and slaves were brought in from West Africa to work on the plantations. Today more than four-fifths of the population are of African descent. French Creole is still widely spoken, although English is the official language, and Catholicism remains the prevalent religion – alongside a tenacious belief in the occult.

The French abolished slavery in St Lucia in 1794. When the British regained control, the ex-slaves feared recapture, and formed into a guerrilla army. The community that lives at the base of the Gros Piton is known as the Fond Gens Libre, the valley of the free people. If you hire a guide to lead you to the top, you will reach the summit after a challenging 90-minute hike and be rewarded with a magnificent panorama of the island and a view across to Martinique.

In 1833 it was the turn of the British to abolish slavery. Sugar was no longer profitable, and the plantations were replanted with cocoa. There is still one working cocoa plantation on the island, Fond Doux, run by Eroline Lamontagne and her husband Lyton. It is also a hotel. Eroline shows me round the colonial villas she has rescued from around the island, having rebuilt and restored them. They are charming period pieces with gingerbread lattice work on the verandas and white painted jalousie shutters, set in gardens of starfruit, guava and cinnamon trees. The cocoa is dried on site. I drink a cup of delicious cocoa tea, made from boiling the ground pod with milk and spices. From next year Fond Doux will make its own chocolate. Confectioner Hotel Chocolat is also building a hotel on the island for completion by March next year.

Fond Doux is an old haunt of Derek Walcott. The Nobel Prize winner (the island has more Nobel laureates per capita than anywhere else in the world), who was born in the St Lucian capital Castries, set part of his play Ti-Jean on the estate. 'He does like the cocoa tea, but we have to be careful not to make it too sweet,' Eroline tells me maternally, 'on account of he's diabetic.'

Walcott's house is to the north of Castries, in the fishing village of Gros Islet. On Friday nights, the town gathers for the weekly Jump Up. Walk down the main street and browse the barbecue stalls: choose fresh fish with conch fritters, buttered corn on the cob or cow's kidneys. People go dressed for a party – the local girls stand out in high heels, hot pants and elaborate hairdos. Reggae music blasts from a wall of speakers and, by 11pm, expect to be swept up in the dancing. The atmosphere is contagious.

The contrasts in St Lucia's heritage, the mingling of diverse ancestries, beliefs and languages, are a principal theme in Walcott's work. In tribute, the main square in Castries has been renamed Derek Walcott Square. The historic parts of Castries have mostly been destroyed by fire, but a short walk from the square up Brazil Street, some traditional fretwork houses are still standing, sandwiched between vivid beauty salons and store windows full of iced cakes.

Saturday is the best day to visit Castries market, where locals come to buy, to sell, to catch up. Yams and grapefruit, finger aubergine and red-skinned avocados are spread out on tables. A sweet smell draws me to the back of the market, where I'm surprised to trace it to a stall selling goat stew. 'The secret ingredient is sugar,' Gracious, the chef, tells me. The stew, finished with nutmeg and costing about £2, is delicious.

Castries lies on the west coast of St Lucia, facing the placid Caribbean Sea. The majority of the hotels also look west, avoiding the buffeting the east shore receives from the Atlantic. However, Coconut Bay, a family-friendly resort with water slides and a swim-up pool bar, nestles in a sheltered cove on the less-developed Atlantic side. The geography of the bay, and the prevailing north northeasterly wind, provide ideal conditions for kite surfing, and a new centre, 2 Elements, has just been completed in time for the windy season (November to May).

It is run by Brit instructor Chris Haysey, who shows me the area of flat water close to the beach, where beginners will learn, and an arc of white water, shaped by a reef, ideal for experienced kiters. Unlike most kite spots, access to the bay is controlled by the resort. The number of people kiting will therefore be limited, allowing learners to practise away from the crowds. I was there before the wind came. Sitting on the still, bright beach, I could imagine the wind rising, and the feel of the kite above me and my board glancing the ocean in this paradise bay. Next time...

WAY TO GO
British Airways flies to St Lucia five times a week from London Gatwick. Join the executive club and earn up to 8,456 miles when you fly Club to St Lucia. Visit ba.com, where you can also book holidays and Avis car hire.